Rope Rescue Equipment Rope The rope used for rescue purposes is almost exclusively the same type no matter what the situation. Rescue rope is often called “static kernmantle” rope. The term static refers to its low stretch properties and kernmantle refers to its construction. Rescue rope has very little elasticity, as you would not want a patient to experience a “rubber band” effect while being lowered off of a cliff. In certain situations you may want to have shock absorbing qualities in your rope. In these instances, such as climbing above an anchor where you might want to absorb the shock of a fall, you would want to use “dynamic kernmantle” rope. Kernmantle is actually a combination of two German words that translates in to “core” and “sheath”. The core or kern of the rope is comprised of nylon (or other synthetic materials) fibers that run the length of the rope as one continuous unit. The sheath or mantle is made up of a braid of nylon fibers that protect the inner core from damage. The mantle is what gives the rescue rope its durability and resistance to abrasion. The kern of the rope is responsible for carrying the load imposed on the rope and holds up to 85% of the total load on the rope. Storing it in a cool dry environment away from sunlight and harsh chemicals should care for your rescue rope. While rescue rope can get wet during its use (although this can reduce its strength up to 40%) care should be taken to never get it dirty. Small dirt particles and sand can enter the core and slowly abrade the inner fibers. For this reason one should never step on rescue rope or webbing.

Webbing Webbing used in rope rescue is also made of nylon and comes in two sizes, 1 and 2 inch. 1 inch is usually used for anchor construction as it fits easily in to carabiners. 2 inch is mainly used any time it comes in to contact with the body as it spreads out the force imparted to the body and makes it more comfortable. For these reasons, 2 inch webbing should be used for all harnesses and stokes basket lashings.

Harnesses used for rope rescue can be tied out of 2 inch webbing or can be commercially sewn harnesses. Either type of harness should be snug fitting around the waist and leg loops.

Cordage is small diameter rope that is used for a variety of purposes. Its most common use is to construct prusik loops. Prusik loops are usually small diameter cordage (also called “Perlon”, a trade name) tied in to a loop with a double fisherman’s knot. These loops are attached to a main line rope with a prusik knot to create a “rope grab”. These rope grabs are used in a variety of situations and are often doubled up when used with a prusik minding pulley. When doubling up prusiks, cordage should be cut in 55” and 60” lengths so that the tied prusik loops will grab the rope evenly and share the load.

Hardware Carabiners (also called “D” rings, snap links and ‘biners) are used to connect knotted rope to other ropes, hardware, or software. They are made out of aluminum or steel alloy and are incredibly strong. The bulk of the strength is borne by the spine or bar opposite the gate of the carabiner. The carabiner is locked by screwing the collar down the gate until it covers its notch. Whenever possible, the carabiners should be oriented “locking down” so that any vibration of the carabiner will not unlock or unscrew the locking collar.

Single Line Lowering System When lowering one rescuer down a slope, begin by selecting an appropriate anchor. For one-person loads, a live tree of appropriate diameter, large immovable rock or vehicle may serve as a suitable anchor. Rig the anchor with a webbing sling or short section of rope tied in a tensionless tree wrap and then connect a carabiner to the end of the anchor.

. Tensionless tree wrap shown from above and side. Safety knot omitted for clarity. A carabiner may be used to connect the figure 8 knot to the standing part of the rope if available.

Attach the figure 8 knot to the harness of the rescuer to be lowered. Conduct a visual and load test in a safe location before lowering the rescuer over the edge. This method of lowering allows the rescuer to use both hands when negotiating the edge and any obstacles they might encounter. If the rescuer needs the friction device to be locked off so that they may work on a situation, lock off the figure 8 descender as described in the rappelling section. Once the rescuer is in a safe location and requests to come off belay, unlace the figure 8 descender and retrieve the rope to use for the next rescuer. If the next rescuer must descend and there are no other rescuers available for belaying. Unlace the figure 8 and re-rig the anchor for rappelling as shown in the next section.

Rappelling When selecting a site to rappel from, pay careful attention to the condition of the edge so that it is free from obstructions and loose material. Rig a suitable anchor with a webbing sling or tensionless tree wrap and attach a carabiner to the end of the anchor rig. Tie a figure 8 knot in to the end of a rope, attach it to the carabiner and carefully lower the remainder of the rope over the edge.

Conduct visual and load tests in a safe location and advise your rescuer at the bottom that you are on belay and on rappel. The rescuer at the bottom can act as a bottom belay by pulling on the rope, which will increase friction in the figure 8 descender. If the rappelling rescuer should become incapacitated, the bottom belay can lower the rescuer by controlling the friction from below. Maintain a proper “L-shaped” stance when rappelling and moderate the amount of friction on the figure 8 descender by bringing your brake hand towards the figure 8 (decreases friction=faster descent) or bringing it away from the figure 8 towards your buttocks (increases friction=slower or stopped descent).

Properly laced figure 8 with brake hand in position. Never take your brake hand off the rope, unless the friction device is locked off.

Bring the rope from your brake hand across the back of the figure 8 descender in one continuous motion. This locks off the figure 8 friction device.

Lock off the figure 8 a second time and complete the lock off by bringing a bight of rope back through the figure 8 and tie an overhand safety knot around the standing end of the rope. 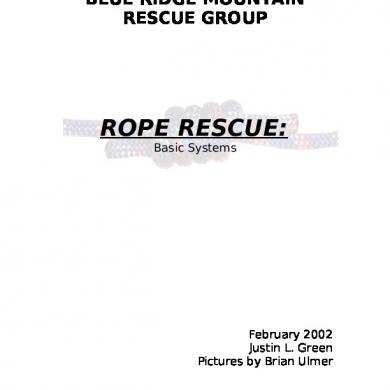 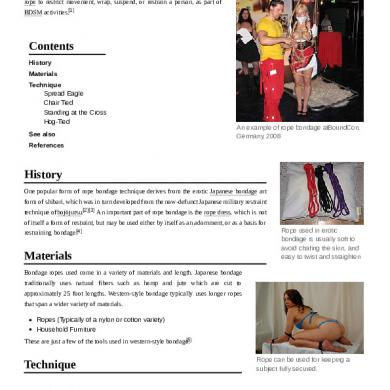